Paper or plastic for protective packaging?

Rising interest in eco-friendly materials has propped up a debate between paper vs plastic packaging. Paper is often hailed as being easily recyclable, while plastic is known for its light and durable qualities. But which material comes out on top overall?

In this article, we’ll take a look at:

How does paper production compare to plastic?

The Environment Agency (UK) reports that paper must be reused at least three times to negate its higher climate warming potential, compared to plastic. This fact begs the question, what makes paper’s climate footprint larger?

For starters, it takes more than four times as much energy to manufacture a paper bag as it does to produce a plastic bag, according to a report commissioned by the Northern Ireland Assembly. You can only imagine what the difference would be for producing material-heavy paper void fill, compared to air cushions made of 99% air.

Finally, source materials need to be considered. Paper is often lauded for being made of renewable resources (trees) and not oil or gas. However, cutting down trees at an accelerating rate causes deforestation, which introduces a plethora of problems like loss of wildlife habitat. Meanwhile, thin plastic film is commonly made from the byproducts of oil refining, using up what’s left from the fuel industry.

The difference is even starker when it comes to void fill. Paper is much heavier and uses about 5X as much material to fill the same space as Opus™ air cushions.

The difference is even starker when it comes to void fill. Paper is much heavier and uses about 5X as much material to fill the same space as Opus™ air cushions.

How are air cushions more economical than paper void fill?

The Environmental Literacy Council estimates that one lorry of plastic carriers could transport the same number of bags as seven lorries filled with paper carriers. That’s because paper bags weigh more than plastic ones. As a result, vehicle emissions and fuel consumption rise as the weight of shipments grows.

The difference is even starker when it comes to void fill. Paper is much heavier and uses about 5X as much material to fill the same space as Opus™ air cushions. This contributes greatly to the already higher climate impact of paper packaging.

Of course, plastic doesn’t come without issues. Virgin plastics are widely criticised for their relatively low recycling rates, which is an especially acute problem with materials like polystyrene. As a solution, Greenlight has developed a unique blend for Opus™ air cushions, containing at least 50% recycled materials. Greenlight also offers a biodegradable range or air pillows. 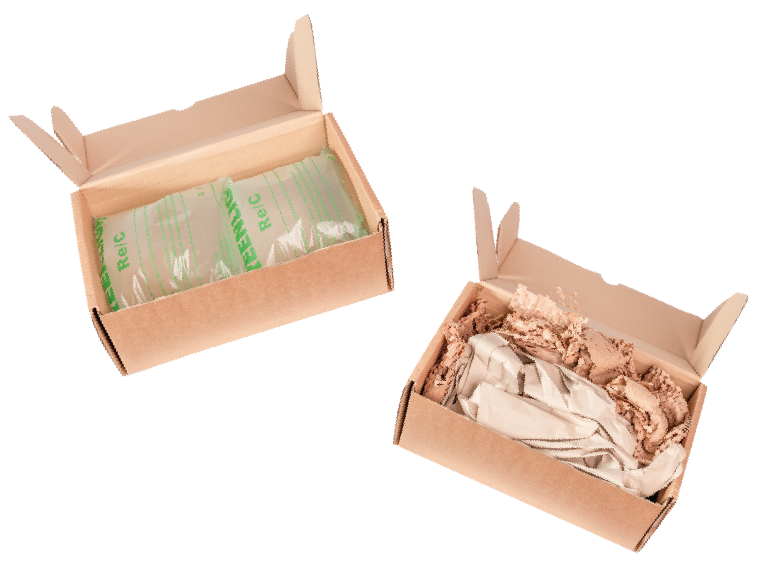 We use cookies on our website to give you the most relevant experience by understanding how you interact with the site. We also use cookies for marketing and advertising purposes. By clicking “Accept All”, you consent to the use of ALL the cookies. However, you may visit "Cookie Settings" to provide a controlled consent.
Cookie SettingsAccept All
Manage consent

This website uses cookies to improve your experience while you navigate through the website. Out of these, the cookies that are categorized as necessary are stored on your browser as they are essential for the working of basic functionalities of the website. We also use third-party cookies that help us analyze and understand how you use this website. These cookies will be stored in your browser only with your consent. You also have the option to opt-out of these cookies. But opting out of some of these cookies may affect your browsing experience.
Necessary Always Enabled
Necessary cookies are absolutely essential for the website to function properly. These cookies ensure basic functionalities and security features of the website, anonymously.
Functional
Functional cookies help to perform certain functionalities like sharing the content of the website on social media platforms, collect feedbacks, and other third-party features.
Performance
Performance cookies are used to understand and analyze the key performance indexes of the website which helps in delivering a better user experience for the visitors.
Analytics
Analytical cookies are used to understand how visitors interact with the website. These cookies help provide information on metrics the number of visitors, bounce rate, traffic source, etc.
Advertisement
Advertisement cookies are used to provide visitors with relevant ads and marketing campaigns. These cookies track visitors across websites and collect information to provide customized ads.
Others
Other uncategorized cookies are those that are being analyzed and have not been classified into a category as yet.
SAVE & ACCEPT
Powered by